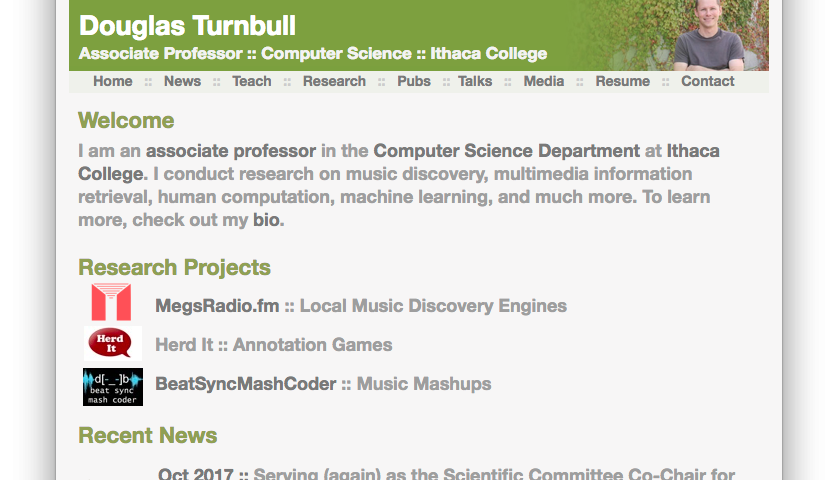 I created my old academic website back in 2008 using iWeb and boy have the tools changed. As such, I decided to replace that site with a shiny new WordPress site so that it would be more responsive, easier to update, and more fully featured.

One of the things that I liked about my old site is that I did a sort of short-form microblogging thing before it was hip. It doesn’t really fit with the WordPress setup but I wanted to carry forward a record of all of the things that I have done during my first 9 years as a faculty member at both Swarthmore College and Ithaca College.

Oct 2016 :: Check out the WICB’s Ithaca Now radio piece and The Ithacan news article about MegsRadio.

July 2016 :: Thorsten Joachims and I were awarded our second collaborative NSF grant to study counterfactual learning.

Feb 2016 :: I was awarded tenure and promoted to associate professor at Ithaca College!

Jan 2016 :: Attended NEMISIG 2016 hosted by the METLab at Drexel with Shane M. and Mariah F. It’s always nice to be back in Philly.

Nov 2014 :: Brian Dozoretz and I are leading discussion on “Supporting the Local Music Community” for the Ithaca College THATCamp

Oct 2014 :: Josh Moore won the “Best Student Paper” at ISMIR 2014for our Listening Habits and Geography. Nice one Josh!

April 2014 :: Went back to my old high school to give a talk on recommender systems. Lots of talent young programmers in the audience

March 2014 :: Giving a talk on “Growing Local Music” at the TEDx IthacaCollege conference.

Jan 2014 :: Bringing four JimiLab students with me to NEMISIG 2014 at Columbia University. Check out our JimiLab presentation.

Sept 2013 :: Two news articles from Buzzsaw and The Ithacan and an interview on WICB’s Ithaca Now about MegsRadio.fm

Sept 2013 :: Very excited about the launch of MegsRadio.fm ahead of Porchfest

April 2013 :: About to give a new talk about recommender systems at Dryden High School.

Oct 2012 :: Headed to Bryn Mawr College for the AALAC/Mellon 23 Working Group on Information.

Oct 2012 :: Josh is over in Portugal at ISMIR 2012 presenting our paper on automatic playlist generation. To be a grad student again…

July 2012 :: Headed to Toronto for EAAI to present a model AI assignment on music genre classification.

June 2012 :: Josh will be presenting some of our work on playlist algorithms at an ICML workshop on Machine Learning and Music. Check out this cool demo that we put together.

May 2012 :: I’ll be presenting my research on personalized Internet radio at Music: Cognition, Technology, Society at Cornell University.

April 2012 :: Our paper on “Game-Powered Machine Learning” was just published in the Proceedings of the National Academy of Science.

Feb 2012 :: My patent on “Generating Audio Annotation for Search and Retrieval” finally issued after almost 4 years.

Dec :: The Ithacan published an interview about my research on the analysis of music imagery.

Nov 2011 :: Headed to Eastman for my first Music Cognition Symposium with talks by Bryan Pardo and Roger Dannenberg.

Oct 2011 :: Our paper “You Can Judge an Artist by an Album Cover” came out in IEEE Multimedia magazine.

August 2011 :: My PhD. Adviser Gert Lanckriet was just named a top“Innovator Under 35” by Technology Review for work that he and I did on music annotation. Nice one Gert!

June 2011 :: In San Francisco for an Imagine Cup design review at Microsoft. Check out IC’s Embryonic video and vote for it to win the People’s Choice award!

May 2011 :: Just finished my first year at IC. Teaching was fun but now it is summer research time.

April 2011 :: Just got back from ACM SIGCSE “Computing and Music” committee meeting at Wake Forest. So many interesting discussions in so little time.

Jan 2011 :: Headed to Drexel in Philly for NEMISIG 2011. My favorite one-day Music Info Retrieval workshop east of the Mississippi…

Sept 2010 :: Invited to CIRMIT at McGill University in Montreal to give a talk on Music information Retrieval with Cultural Data.

August 2010 :: Just started as an assistant professor at Ithaca College.

June 2010 :: Packed up my office. It’s been an amazing two years: great classes, amazing students and tons of research.

June 2010 :: At ICMC where Jānis is presenting his work on analyzing promotional photos and album covers for music classification. Check out our Artist Image Browser.

May 2010 :: Youngmoo Kim and I received another NSF Research opportunity award for a second summer of collaboration. Ashley will be funded by a special Swarthmore Alum grant.

March 2010 :: At ACM MIR presenting papers by Ashley Oudenne and Derek Tingle as well as co-chairing a special session on Multimodal Music-IR.

March 2010 :: Jānis Lībeks paper that explores the role of “image” in popular music was accepted to ICMC 2010

Feb 2010 :: A nice article in the Swarthmore Phoenix on how “ChesTech aids Chester with Computer Access”

Jan 2010 :: Just returned from the NEMISIG where my students presented demos and posters on autotagging music, Meerkat, the BeatSyncMashCoder, and the Artist Image Browser.

Dec 2009 :: Our BeatSyncMashCoder paper was accepted to IEEE ICASSP 2010 in Dallas.

Aug 2009 :: spending time at the University of Botswana to learn about computer science education in the developing world.

Sept 2008 :: Started teaching at Swarthmore College. So far so good…