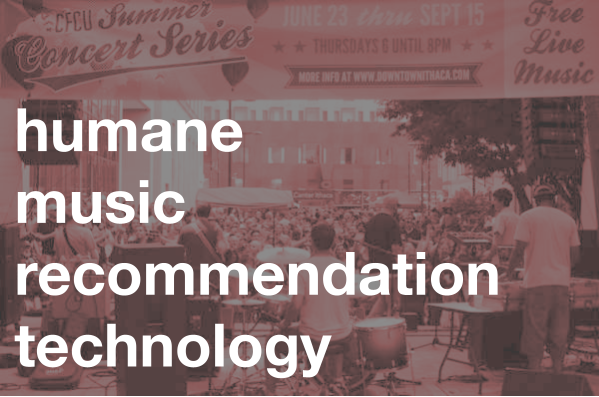 Localify.org has been designed to embrace the concept of humane technology. We do have an agenda but it is not to make money. Rather, it is to use music recommendation technology to support local music communities.

What is Humane Technology?

A central tenet of humane technology is not that a given technology is inherently bad, but rather that a business model can co-opt the technology in such a way that there are significant adverse effects on individuals, the community, and society at large.

The primary example is the Facebook recommendation algorithm which pushes the posts, groups, and comments that will likely maximize user engagement. Unfortunately, maximizing engagement often evokes negative emotional responses (being enraged, depressed, jealous) and can cause significant social and psychological problems (political division, the spread of misinformation, teenage suicide.)

Just over a year ago, the Social Dilemma was released on Netflix. It features a number of tech luminaries talking about this “inhumane” technology problem. It is a powerful documentary that provides much-needed context to a broad audience of parents, educators, and technologists. Subsequently, two of the main people featured in the documentary, Tristan Harris and Aza Raskin, started the Center for Humane Technology as a place to study the problem and explore possible solutions from minor UI/UX design tweaks to government regulation. They host an excellent podcast called “Your Undivided Attention” which gives them the space to dig deeper into topics that were introduced in the Social Dilemma.

More recently, Frances Haugen, a former Facebook engineer testified in front of congress to talk about a collection of Facebook documents that she secretly gave to the Wall Street Journal. The documents reference internal research at Facebook that explicitly showed how Facebook was aware of the negative consequences of their applications (Facebook, Instagram) on society. Tristan Harris referred to her testimony as a watershed moment for Humane Technology and compared it to the 1994 congressional hearings that brought down “big tobacco”.

If you are interested in learning more about human technology, I would recommend checking out “The Ethical & Humane-Tech Reading List” which is maintained by Alexander Steinhart. It lists many great books, articles, videos, talks, and podcasts.

Even before I was introduced to the concept of humane technology in the Social Dilemma, I was deeply concerned about how music streaming services were adversely affecting music listening habits. In particular, I am concerned that despite enabling an increase in access to music, music streaming services (Spotify, Apple Music, YouTube, Amazon Music, Deezer, etc.) are contributing to an increasingly “rich-get-richer” marketplace in which a smaller set of artists (often backend by well-funded major record labels) are able to dominate what people listen to.

I wrote about this in a blog post that references a recent Rolling Stones article entitled “Adding Up Music’s 1 Percent: Data Shows 90 Percent of Streams Go to the Top 1 Percent of Artists” by Emily Blake. In that article, there is this surprising figure that shows how streaming music is a more narrow market distribution than there was for physical CD sales which directly contradicts statements from the likes of Daniel Ek (Spotify) and Chris Anderson (Wired) that streaming would “democratize” music consumption.

This consolidation is just one of many problems caused by the music streaming industry. Music tech journalist Liz Pelly has a series of articles that explores various problems caused by streaming music technology. Her articles are on everything from gender bias in recommendation to teensploitation to how artists feel pressure to produce increasingly bland music. I must admit, I get pretty depressed when I read her articles but they also make me want to do something about it.

What if music recommendation was not influenced by coercive business models? What if instead, the music recommendation system was designed to support the local music community of fans, artists, and small business owners? These are the questions that we attempt to explore in our Localify.org project.

Localify.org is a student-built, not-for-profit, academic-based, locally-focused music artist and event recommendation system. Our main goal is to get more people to go see more local shows by more bands at more small venues. Our secondary goal is to explore what best practices might look like when thinking about making music recommendation a more humane endeavor.

Here are some of our initial design goals:

* With respect to listener data, we do plan to distribute our data (with personal identifying information removed) to facilitate future academic research in recommender systems. Currently, there are relatively few publicly available data sets from large-scale recommendation applications. Most companies are unwilling or unable to share their data because it is both valuable and provides significant competitive advantages.

We have also toyed around with the idea of never paying social media companies for advertising. This is something that I would like to adhere to but don’t know much about marketing so I’m unsure if this is feasible.

Make no mistake: we do have an agenda but it is not to simply maximize profits. It is to help lift up the local music community, to help music fans find great local shows, to help local artists grow their fan base, and to have a positive economic impact on local businesses (music venues, restaurants, recording studios).

My name is Doug Turnbull and I am a professor of computer science. I am an expert in machine learning, recommendation systems, and music information retrieval. I work with a team of talented undergraduate students but they keep graduating on me. We have been able to launch a complete first version of Localify but we realize that we still have a long way to go for the project to be a success.

If you are interested, here are a few ways you can help:

Every once in a while I get asked if we need financial donations to support Localify. For the time being, Localify is fully funded by the generous support of the National Science Foundation, Ithaca College, and Cornell University. But if you want to send my students a pizza, I am sure they would appreciate your support.