One of my favorite things to do each year is to take a couple of JimiLab students to my favorite one-day academic event: The North East Music Informatics Special Interest Group (NEMISIG) workshop. The students both get exposure to what life might be like as a grad student and they get to present their work on an equal footing with grad students and professional researchers. I also like NEMISIG because I get a chance to rap with my students on the long drive. We often talk about “what’s next” in terms of job prospects, grad school, college living, and life after college. And, of course, we listen  to a lot of great music on the drive.

This year I brought two students, Danny Akimchuk and Tim Clerico, with me to Brooklyn College. Danny has been working with me since his freshman spring. He spent two summers in the JimiLab and was the major force (along with former JimiLab Alum Shane Moore) behind the playlist algorithm together for MegsRadio.fm. He is a rare student who has deep math chops, is an amazing software engineer, and is one of the most positive people I know. He currently has a couple of amazing job offer in hand is (sadly for me) headed to green pasture when he graduates this spring.  But before then, we are hoping to submit a scientific manuscript on locally-focused music playlisting to ISMIR 2019.

By contrast, Tim recently started working for me this past Fall on a project called Localify.org. It is a local music event recommendation system that also integrates with Spotify. Tim has worked hard this year to build out the event web scraper, the web app’s frontend UI, and the hosting environment. He is easily one of the most pro-active students I have ever worked with and I am looking forward to him taking on a leadership role in JimiLab this coming summer.

My other favorite thing about NEMISIG is that it gives me a chance to reconnect with many of the friends and colleagues I have grown up with in the Music IR community. This year, Michael Mandel and Johanna Devaney hosted NEMISIG at Brooklyn College. Michael and I did very similar research during our grad school days (autotagging, music games-with-a-purpose) and I spent a summer with him in LabRosa. Johanna and I ran the program committee for ISMIR 2016 and love to talk about music psychology research. In addition, they have kids that are the same age as my kids so it is easy to talk with them about the trials and tribulations of an academic lifestyle.

All the usual suspects we were all in the house: my old friend Brian McFee from UCSD who just landed a sweet new assistant professor gig at NYU, Juan Bello who (along with Dan Ellis from Columbia) started NEMISIG and his been an informal academic big brother to me, Youngmoo Kim from Drexel who was my main mentor during my first two years as an assistant professor while at Swarthmore College, Zhiyao Duan who is my closest music IR neighbor at U of Rochester, and Katie Kinnard and Chris Tralie who are the fresh kids on the block with new assistant professor gigs at Smith and Ursinus, respectively.

Each year at NEMISIG, we decide who will host the following years’ NEMISIG. Over the past few years, I’ve developed a slight reputation for being in charge of the necessary arm twisting to get the job done. My colleague Josh Moore and I hosted NEMISIG at Ithaca College (along with a rockin’ NEMIJam DIY show in my basement – see below) back in 2015 so it seems like it might be my turn to host it again in 2020. Stay tuned…

ps – Here is a photo gallery from NEMIJam 2015 (the NEMISIG DIY Show) in my basement. 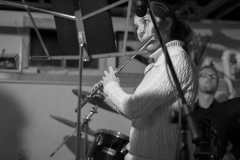 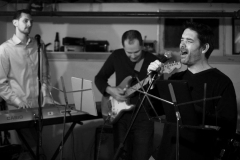 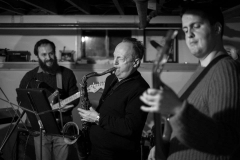 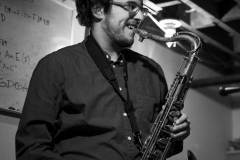 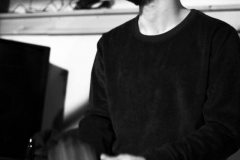 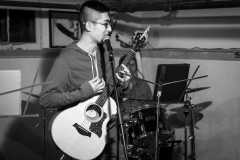 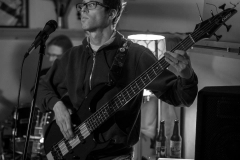 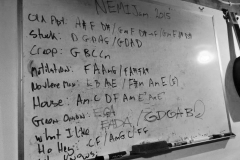 pps – Even the NEMIJam setlist was the focus on some OCR research by JimiLab Alum Andrew Horwitz.